I’ll probably be absent again for a few days. I’m in the midst of doing the “Stand By Me” thing for a friend. She broke up with her boyfriend so he committed suicide in her garage this morning.

We are incredibly relieved and thankful that he did not harm her or her family, but she saw it… and the neighborhood heard it…

I have incredible respect and awe for our police force who have to deal with this. They’ve been wonderful today.

That’s all I can say right now, except that I’m headed back over there again tonight. If you pray, please do so for my friend.

More than a day late and a dollar short, here is what I’ve got for the Weekly Words Challenge with “R” (things that begin with the letter R) and angry: 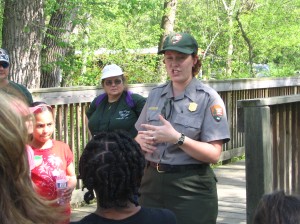 I was too busy to post on Tuesday because I was hanging out with 2 busloads of 3rd graders, assorted teachers & parent chaperones, and a Ranger. 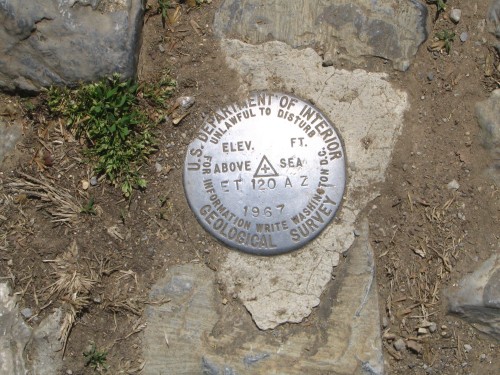 It was probably a Regulation for these markers to be placed along the trail. 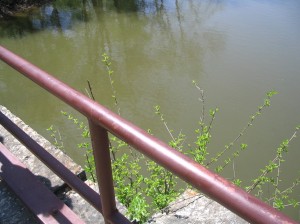 Looking down at the mouth of Antietam Creek where it meets the Potomac River. Historians say this body of water ran Red with the blood of Civil War soldiers after the battle of Antietam (or Sharpsburg, if you are a true Southerner). There were nearly 23,000 casualties in that single day battle; over 3,650 soldiers died and another 17,000+ were wounded. 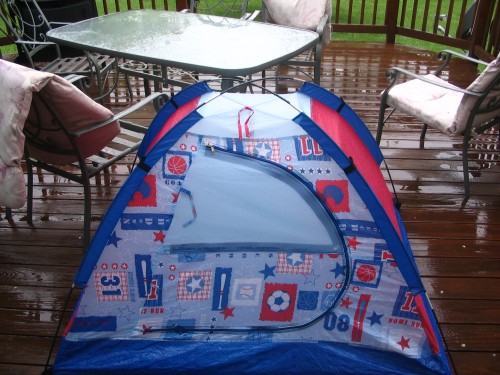 SnakeMaster wanted to sleep outside on Tuesday night, even though I warned him about a possible thunderstorm and showers expected off and on for the next few days. Sure enough, he woke up at 6 AM Wednesday morning with Rain on his face. He left his tent and got ready for school. It wasn’t until after school that I realized he had left all of his bedding in the tent… 2 cushions, 2 pillows, and 4 blankets. I wasn’t angry, but everything was soaking wet.

The words for next week are:
Bokeh (Definition HERE)
and
Heart

Sheesh! Angry was such a difficult word for me that I didn’t even provide a picture (hence the dollar short comment above) — and now Tink wants bokeh! That will certainly stretch my photography skills.

Posted in In remembrance, WWC

Last night was starry and clear, and the weather report gave our area a freeze warning.

But now? Here is our forecast, from tonight and beyond:

I might be absent from the blogsphere for a few days…

Here’s what’s on my mind… 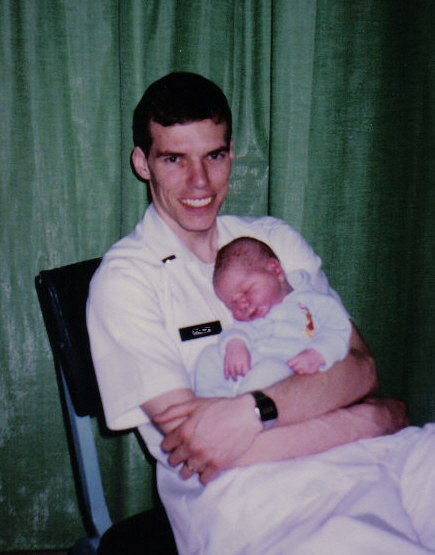 has become a man… 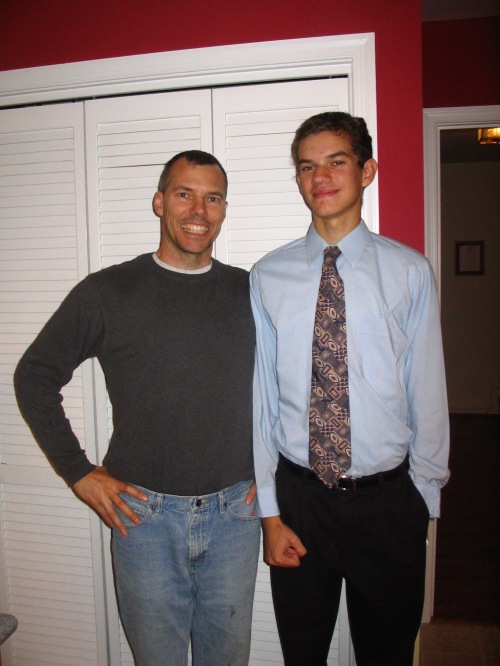 Posted in birthday, life LOVE and the pursuit of happiness, MusicMan

In the absence of the vacationing Tink, Jay hosted the Weekly Words Challenge last week and gave us our words for this week: DOOR and HOME (or things that remind us of home). 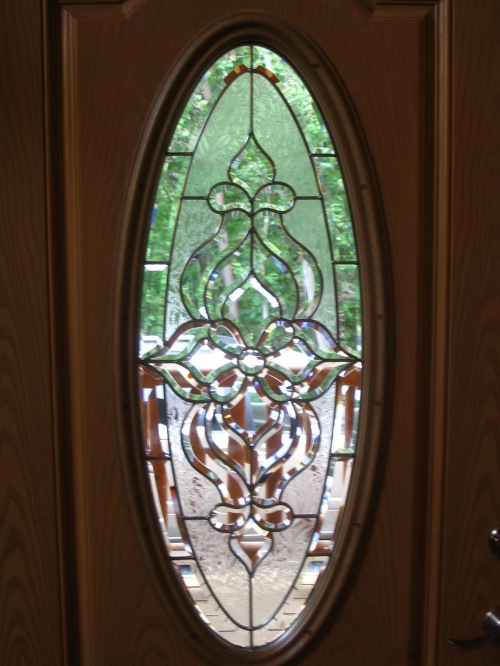 Yes, I’ve used this picture before (it’s from May 2008) but I absolutely love this door. A couple of longtime friends & I get together each Spring for a girls’ weekend, and this was the front door from the house we rented last year. 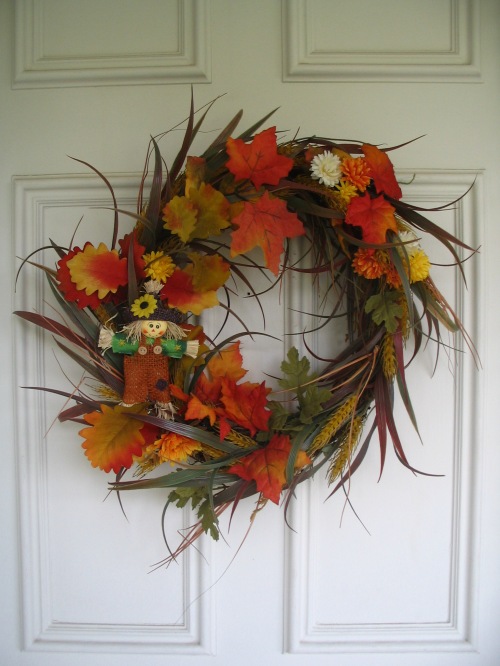 Changing seasons bring different decorations…
This is my front door in Autumn. 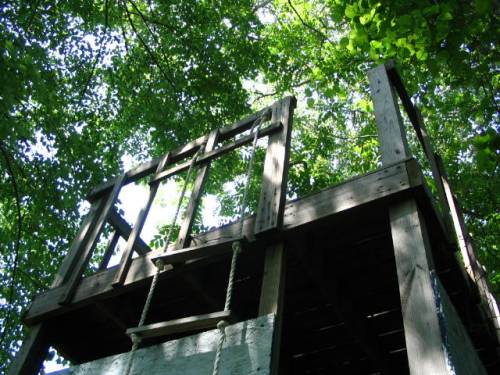 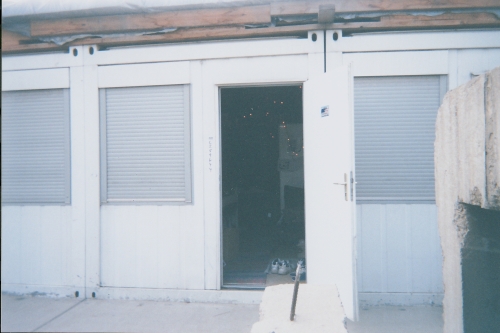 Front DOOR and temporary HOME for one year (SuperDad took this photo, as I did not accompany him there).

Family makes me think of HOME. This photo of EB with his great-uncle was taken at my in-laws’ home — one of my favorite vacation spots!

What makes you think of home?

A list of regular WWC participants can be found here.

And even though I’m not good about posting my pics on flickr {something to do with not paying for a pro account}, we do have a WWC flickr group.

Floral was the theme this week (the Thematic Photographic week runs from Wednesday evening to Wednesday evening). The crocus blooms are just now popping up in Ontario, but here we are at the tail end of the daffodils and into the tulips. 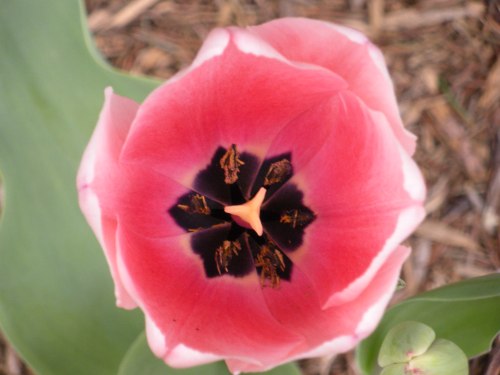 Literally into the tulips! 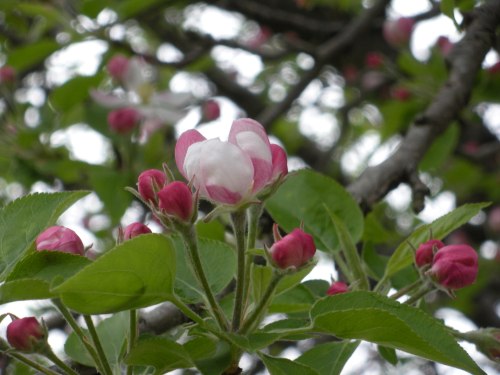 Just when we were despairing of having any at all, the apple blossoms have burst forth. 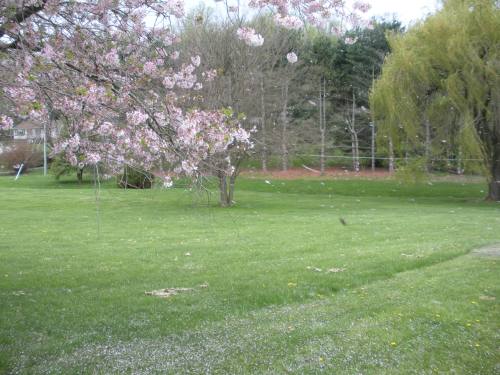 The blossoms blowing off of the neighbor’s tree looked like a flurry of snowflakes. The grass was dusted with pink blossoms (and a few dandelions). 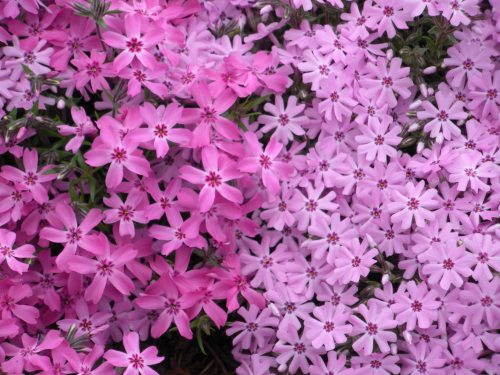 A small garden in front of our house is currently carpeted with Creeping Phlox in pinks and purples. 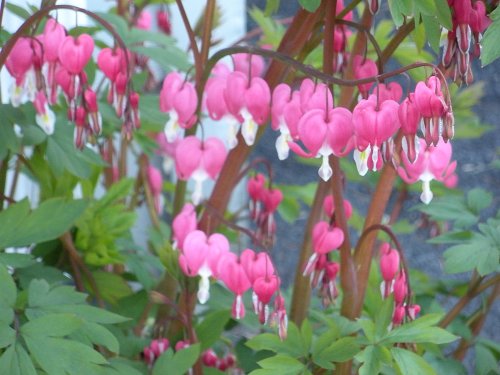 Want to play along? Carmi explains how it’s done here.

Come back tomorrow for the Weekly Words Challenge. The words are DOOR and HOME (or anything that reminds you of home).

I am a flower quickly fading
Here today and gone tomorrow
A wave tossed in the ocean
Vapor in the wind
Still You hear me when I’m calling
Lord, You catch me when I’m falling
And You’ve told me who I am
I am Yours, I am Yours

I am a flower quickly fading
Here today and gone tomorrow
A wave tossed in the ocean
Vapor in the wind
Still You hear me when I’m calling
Lord, You catch me when I’m falling
And You’ve told me who I am
I am Yours

I am a flower quickly fading
Here today and gone tomorrow
A wave tossed in the ocean
Vapor in the wind
Still You hear me when I’m calling
Lord, You catch me when I’m falling
And You’ve told me who I am
I am Yours

Posted in life LOVE and the pursuit of happiness, music

Ramblings of an old lady

My high school reunion is coming up in 15 more weeks. #25. Some of my old classmates have been busy pre-partying and the pics are up on facebook. All of my old classmates look better than me (this from the delusional woman who can look in a mirror and still see a thin person peering back at her). And yet… some of the pictures show them clinging to youth with drunken abandon. And I think, “Who would want those particular pictures out there on the internet for your children/boss/co-workers/pastor/you-name-it to see?” This alone puts me in the “mature woman” category — not because I am mature and they aren’t, but because I am talking like an old lady… and I’m a little concerned about tagged photos of me showing up in August.

I started rounding my age up in my early 30’s. Many women I admired were older by a few years and I wanted to be in their age bracket, so for a few years I was 35, and then I spent 4 years being 40. In some ways, this kept a new decade from being a shock. (I’d been saying I was that old for 4 years, after all!) After 40, my husband asked me to only age one year at a time. (male ego, much?)

I suspect that your “worst” decade is the one where you have the greatest stresses happening all at once. In my case, this decade began a few months prior to my 35th birthday — which means my decade is going to last longer than a decade, because really? How can I end the worst decade and begin a new & better one with my firstborn off at college, the next one a high school senior, the third child a high school freshman, and my baby in his last year of grade school? This sounds like crisis mode to me! Not to mention (but I am) my husband threatening to retire at this very same point and throwing my life into more change and upheaval. Oh, wait… did someone say the word CHANGE in regards to a middle-aged woman? I’ve got a hot flash for you: Happy Pills can’t even begin to touch this scenario. Trust me, I’ve tried.

Last August, our high school marching band received their new T-shirts for the school year. On the back is a list of dates they will be playing and where, which I find incredibly helpful. I’ve taken a picture each fall so I can just check my computer if I have a question.

Yeah, I’m a little bit of a geek that way — I also take a picture of the map at the zoo. Digital cameras rock!

The design theme always corresponds with the set of music they play at half-time shows and competitions throughout the fall marching season. I think we all spent the autumn months singing songs in our heads from “West Side Story.” 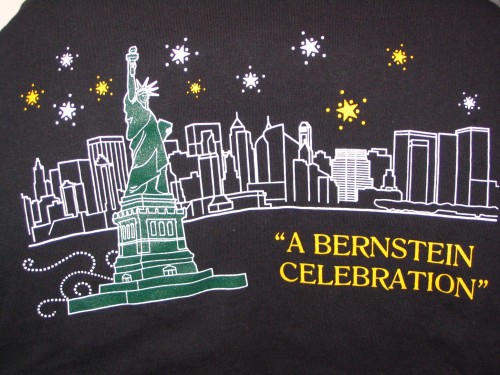 What the T-shirt doesn’t include is the annual Spring Trip, which isn’t decided upon until after the school year is underway. But guess where Music Man is right now? 😀

Posted in age, life LOVE and the pursuit of happiness, MusicMan, Travel