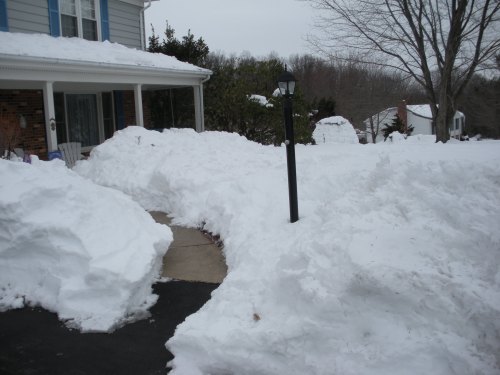 One Week Later (note the igloo in the background!)

1. My kids went back to school on Tuesday, for the first time since February 4th.

2. Tuesday evening my husband called to tell me that he wasn’t coming home. No, nothing was wrong — but there was only one train left and if he took it, he’d get home at 9pm, and he needed to be at work early the next morning, which meant catching the 5am train.  He wisely chose to sleep in his office instead.

3. I’m kind of glad he wasn’t on the train where there is no phone reception, because by 6:45pm I was worried about EB (our 17yo) who wasn’t home yet, either.  He usually goes running after school but now it was late, even for him. He is supposed to run with a club –in a group– but he prefers to run on his own.  He also prefers to walk home afterward (we live 1.5 miles from school).  So I drove to the school, looking for EB along the way. I talked to people at the school (including the athletic director, even though the running club is not an official sport and therefore not under his administration). I drove home, looking for EB along the way. By then it was after 7pm.  Since my husband WASN’T on the train, I was able to call him on the phone.  He told me to call the sheriff.

3. So on Fat Tuesday –instead of eating & drinking– my other kids were getting their own dinner (can you say “find dining” ?) and I was on the phone with the county sheriff’s office. I assured them that No, he was not a runaway  (for which I am grateful). I explained that EB was a runner who perhaps got lost or got hit by a car or fell and smacked his head on the ice, possibly hours ago.  Yes, the mommy brain was running a thousand miles a minute.  At any rate, he WAS apparently a missing person (a missing child, since he was under 18) and it was dark and icy outside.  They promised to send an officer out.  At 7:45pm, I hear a door slam.  It could be the sheriff’s car, but I am near the door to the garage, so I open it and call EB by name… and he answers.  I ask, “Did the Sheriff bring you home?”  No, he walked home by himself… and why would the sheriff bring him home?

4. I call the sheriff’s office AGAIN, this time to say that my missing child has turned up on his own.  They had just sent a deputy to my house, so they call to tell him/her the status.  I’m a little surprised that the deputy doesn’t show up anyway, just to be sure.  Then I call my husband, to let him know that EB made it home safely. While EB is on the phone with his father (who is appropriately giving our 2nd-born the what-for), I am dissolving into tears.

5. After explaining to EB that, until further notice, he may no longer run alone and that as long as this weather holds, he must call for a ride home, I attempt to help him understand why his mother is a puddle on the sofa.  I explain that since he has been running alone, without identification, there is no way that the EMTs or emergency room staff –or the staff at the morgue (he looked startled by that one)– could know WHO he was. He tries to explain that he never once slipped in his running. I point out that just because he didn’t slip doesn’t mean that a car couldn’t hit him, that the roads are plowed only to let cars by, not give runners clearance.  Mothers are worry-warts, aren’t we?

Before you give me advice like get the kid a watch or get the kid a cell phone… please know this: he HAD a cell phone (trac phone) but never used it and let it expire. When he needs to call he just borrows someone else’s phone. He owns and wears a working watch (he got it for running).   It apparently never occurred to him to call us on Tuesday evening.  Yes, it may be that my son has the common sense of a duck.  (Don’t believe that? Maybe you’d better click my link.)

And guess what? It turns out that he was probably stretching in the hall between the gym and the locker rooms when I was at the school asking about him. It is likely that the athletic director walked right past him when he was called to the entrance to speak with me.