1. Health status for each of my parents is looking up right now, although I continue to jump when the phone rings — especially if I see that a family member is doing the calling.

2. Dad moved from the official rehab center to the health unit at his retirement center, which will be much easier on his wife. It was exhausting for her to manage visits several times a week; now she won’t have to drive to see him.  The goal is to regain enough strength to move back into their apartment, but I have some doubts about that ever happening.

3.  Mom hopes to leave her rehab center on Saturday. I think she is a little bit worried about tripping over the cat (who of course misses her) but she is making daily progress and is finally allowed to exercise her knee.  It’s been 18 days since she had her TKR surgery, but the pulmonary embolism situation caused quite the setback 2 weeks ago.

4. MusicMan has been off at a conference this week in PA and is having a fabulous time (“best week ever!”)… despite the ruptured ear drum and the 4 stitches above his eye.  He now knows it’s not a grand idea to sit on the bottom of a deep pool; he also knows why soccer players don’t wear sunglasses.

5. We’re taking a wee family vacation, which means I will be “unplugged” for a while.  Upon return, I’ll be busily getting MM ready for college while transporting H-J to and from band camp. EB is already busy with pre-season Cross Country and will be hitting full stride in August as well.

I am thankful for the harvest from our garden — and SuperDad cooking it on the grill!

What are you thankful for today?

I laid down for a nap on a hot, muggy Sunday afternoon and woke up to booming thunder and rain pelting the windows. By the time the wind was done blowing, the backyard looked like this: 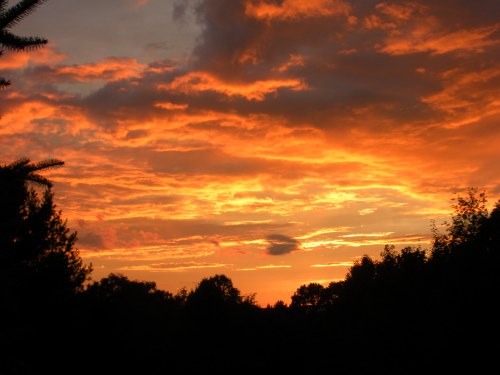 I open the door to the dark morning and feel as though I have been covered with a wet wool blanket. Patches of fog dot the landscape. The dewpoint and temperature are within a few degrees of each other — cool and mysterious on an autumn morning but suffocating when it is 76°F (24°C).

We are in the midst of a hot and humid streak of weather, fairly typical for this point in the summer.  If we are lucky, we get an afternoon thunderstorm to relieve the air just a little bit of its heavy moisture. Even a small gust of wind is welcomed as it blows away the stale air.

On days like this, if you can’t be at the pool, then it is time to stay inside with the comfort of air conditioning and find something to do on a hot summer day.

What did you do to “wile away the summer hours” when you were a kid?

SnakeMaster and his friend wholeheartedly embrace the season. 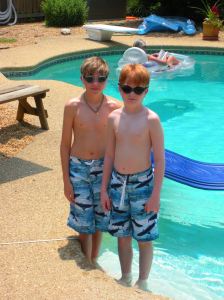 These 2 boys (and the dogs!) are having a great time at the beach this week.

Carmi is focusing on summer this week for Thematic Photographic. Do you have photos to share?

What are the chances?

I spoke (wrote) too soon. Or rather, what was true this morning is true no longer. Apparently, the AZ contingent is now at the ER with probable pulmonary embolism(s).

You’d think that 2 people who’ve been divorced from one another for nearly 30 years wouldn’t be sharing this kind of experience… albeit in different states.

In which I am glad my cell phone died

My cell phone died on Friday night after taking an ice-water shower.  Luckily, it is just a phone and is easily replaced.
_______________________________________________
When I posted on Friday, my mother’s recovery from TKR was going exactly as planned.  She was discharged from the hospital that day and went home with my sister as her caregiver for the first week.  But 4 hours later they called 911 because Mom was having trouble breathing. That might be a mild understatement. An ambulance trip to the hospital was followed by the diagnosis: pulmonary embolisms in both lungs, most likely stemming from long plane rides the previous month. (It was much too soon for the blood clots to be a result of the surgery.) She is now on blood thinners and is keeping her knee immobilized instead of beginning the usual physical therapy, since no one wants bleeding at the surgery site.  A few more days in the hospital will be followed by an additional week in a rehab facility, which is something we all feel good about; it’s too scary to go back home yet.
I am thankful that she had enough breath to talk on the phone this morning.

Phones are replaceable; people are not.

My mother, my father, and I each live in a different state, all far apart from one another.  Both parents were in the hospital last week (and, as it turns out, are each there now as well).  One of my brothers lives in the same city as our mother; the rest of us live in different states, so we have been talking with one another and e-mailing each other rather frequently these past 2 weeks.  We might even be becoming less dysfunctional. There’s always a silver lining, right?
I spoke with my dad on Friday afternoon and he was sounding better to me, but the report from a sibling on Saturday was distressing enough to have me looking up flights and airfares to Arizona.
And here I thought emotional stress was getting my oldest son ready for college on the opposite side of the country and having my youngest son off at the beach with another family for a week!
Silly me.
My dreams last night were full of situations where I was being chased by people and things out to harm me.  I usually don’t remember dreams at all, but since I was flailing about and waking my husband… who then woke me to ask me to please BE STILL… who then became part of my dreams, egging on the people/things that were chasing me… which culminated in me flailing/climbing over the side of the bed and sending books and an anniversary clock crashing to the floor at 1:30 AM (broken glass might have been involved)… at which point I removed my sleep apnea mask and lay quietly (it might have been making me feel suffocated in my dream-state)… after which I began snoring and woke my husband AGAIN… so I went to sleep on the sofa.  Why, yes, I do remember quite a few of my dreams last night.

The good news is that my cell phone can no longer be the bearer of bad news.

Thankfully, the land-line and e-mail both brought good news this morning, and hopefully the relief of that good news today will lead to a decent night’s sleep tonight.

Carmi is focusing on summer this week for Thematic Photographic. The first weekend of July around here truly embodied the “dog days of summer.” 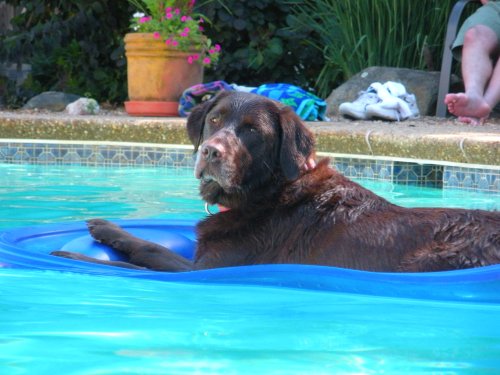 I Scream, you scream, we all scream for…

Guess what?!? Tomorrow (Sunday, July 18th) is National Ice Cream Day here in the United States. Yes, yes it is! In fact, July is National Ice Cream MONTH!  You can thank Ronald Reagan for that — and I think that whatever your political leanings, you should probably admit that he did right for our country with that very proclamation back in 1984.

While I am exceedingly partial to Pralines and Cream — my all-time favorite flavor — I have been known to have a love affair with an incredible ginger ice cream.

What is your favorite flavor of ice cream?