No time to blog.

I’m getting through one of the busiest parts of our “busy season” by making lists and checking things off.

First, one is lulled into a sense of peace and well-being. Roses are still blooming, but the temperatures begin to cool and life is good. 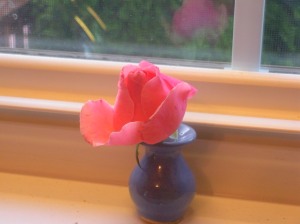 …And then they arrive en-masse… 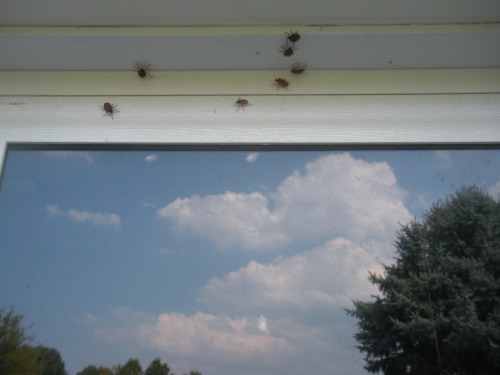 How many do you see in this photo?

For that, I am thankful

The weather here can’t quite decide what to do. We had some lovely fall weather recently, with daytime temperatures in the low 80’s  (about 28C) and nights that were pleasantly cool. The air conditioner had been resting comfortably. That changed yesterday when our weather reverted to summer behavior and humid 90+ temps (32C). I might have been grouchy, but we had the loveliest storm whip through with MUCH-needed rain and even some exciting marble-sized hail stones.  (I was lucky; the hail didn’t begin until I was safely parked in the garage.) As an added bonus, my car got a free washing since I was driving home when the storm hit.

How about you? What are you thankful for today?

Hosted by:
Lidna at 2nd Cup of Coffee

1. Have you, or has someone close to you, ever won an award for anything? (I just came from my dad’s ceremony wherein he was given a medal of honor by the French government for service in France in WWII. Pictures to follow.)
We pulled EB out of public school at the end of 2nd grade for 2 years of homeschooling (long story, best decision for everyone). Our public school at that time was very understanding and worked with us to allow EB to participate in things that mattered greatly to him, one of which was the annual science fair. EB created a science project about velocity and mass, using a homemade catapult and different balls.  He not only took the top honors at the school, he went on to represent the school (the only way he could legally participate) at the district level, where he again won top honors! At the end of the school year, the principal made sure that EB was there for the awards ceremony so that he could be honored with a plaque in front of his peers. This mama was very proud and EB was thrilled.

2. Who is the nearest relative to you who has served in the US Military?
My husband has 20+ years of service in the US Army (with some National Guard and Army Reserve time before that). My uncle was also in the Army, my younger brother is a Marine (not currently serving, but “once a Marine, always a Marine”), and my grandfather served in the Navy (active duty during WWII, reserves after that).

3. Share something that stirs the patriotic spirit in you.
On a regular basis, saying The Pledge of Allegiance at our small town football games stirs my spirit. I am especially stirred at our high school’s annual Veterans Day ceremony/program. There is a club that works all year long on a wonderful program, plus the members work during the year on supporting local veterans.

4. Where are you in the birth order in your family? Do you think your “placement” made a difference in your personality?
I am #3 out of 4 children. If that is supposed to make me laid-back, I guess that it made a difference!

5. Name one trait you hope you carry that was evidenced in your parents or grandparents.
My paternal grandmother was creative, loving, and funny. I often hope that I am a reflection of her (I hardly knew her; we lived far away).

6. If female, do you prefer wearing a skirt or pants? If male, shirt and tie or polo?
I find skirts to be comfortable if they are simple and flowing and not too long — and if I can wear Birkenstocks with them. Otherwise, I will take pants/capris/shorts every time. The added benefit of the latter option is that I can usually wear athletic shoes that support my poor feet, but I suspect this is a question about dressing up a bit.

7. Approximately how many times do you wake during the night? What do you do to go back to sleep?
If I go to bed early enough, I will usually wake once, take care of business, and fall back into bed already half asleep. (It’s quite possible I was never fully awake.) If I am truly awake and my stomach isn’t growling like a bear in springtime, then I’ve discovered that I’m probably supposed to be praying… so I do.

8. Share a favorite movie quote.
Only one? That’s like cats and potato chips…I don’t think I can do that! So here are 3:

9. What is your favorite Fall candle scent?
It’s a tie between “Apricot Brandy” from PartyLite and “Autumn Wreath” from Yankee Candle

10. What is one Fall activity you’re looking forward to?
Well…. Since I am currently in the midst of marching band season (football games! band competitions!) and cross country season (5k meets), I will state that I am looking forward to HOPEFULLY going hiking and camping. We managed to squeeze this in the first part of November last year.

11. Tell us about a pleasant surprise that happened to you recently.
I thought I had all of my weekends thoroughly booked until mid-November, so I was pleasantly surprised when EB had a meet-free Saturday and I was not needed to chaperone a band competition. (I still went to the competition, but I went as a spectator with my dh.)

12. What was it like when you first met your in-laws-to-be?
I was wearing a flannel shirt and jeans –which pretty much matched my guy… we had “style”  in common 😉 –and after walking into the house and being introduced, we all sat down in the living room. Then my future dh said, “So I suppose you might have already heard, we’re engaged.” There was stunned silence. We thought the news of our engagement might have proceeded us, but it apparently had not… LOL  After a few awkward moments, my future FIL said, “Congratulations!” My poor MIL, she was still trying to size me up! That was 23-1/2 years ago and I dearly love my in-laws; I’m pretty sure they like me. 😉
I hope I get to meet my sons’ future wives before that one gets sprung on me!

I’m participating this week in Thom‘s meme called The Muffed Target. Why else would I save this photo? 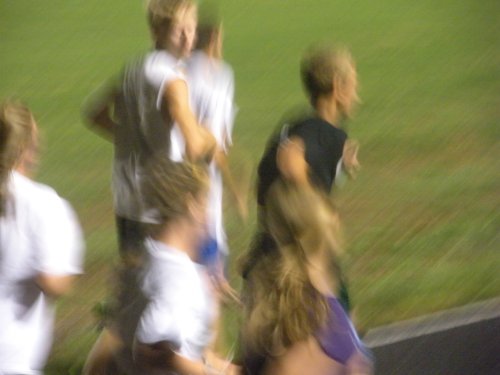 I bring my camera along to nearly all of the cross country meets, but this picture is from the fundraiser run where most of my photos were unusable. My camera does not do night shots well. Couple that with constant movement and even panning is a rather useless technique. On the other hand, if you squint and use your imagination, this might qualify as impressionist art!

What was really happening:
The kids ran laps in the stadium for 89 minutes. (I previously bragged blogged about EB’s results here.)

In answer to Wednesday’s puzzler 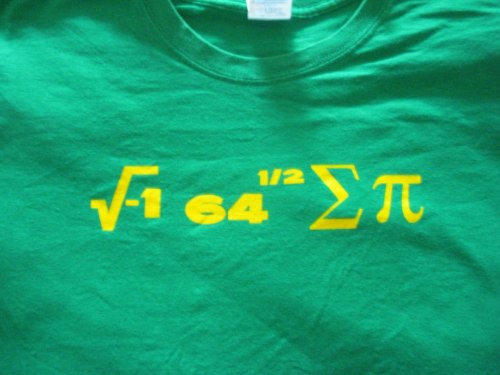 It’s a “pi day” shirt. Every March 14th (3.14) the secondary schools that my boys have attended celebrate “pi day” — they get extra credit if they bring in round desserts: pie, cookies, etc. At their current high school, someone designs a shirt which they sell in advance to be worn that special day. The mathematical sentence reads: “i 8 sum pi” and on the back there is a cartoon figure of the math department head eating pie and saying, “I ate some pie!”

Congratulations to suburbancorrespondent and Thom — both of whom clearly surpass me in mathematics.

In which I turn into a housecat

It happened when I was talking with my 11-year-old about things he hoped to someday see or do. I reached into my brain for an example and… came up with nothing. Not only was I lacking a list, I couldn’t even find the bucket! 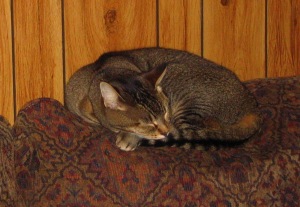 Am I destined for a life of contented napping, purring, and walking in and out of the house countless times a day?
Or can you all help me with some ideas from your own bucket lists? 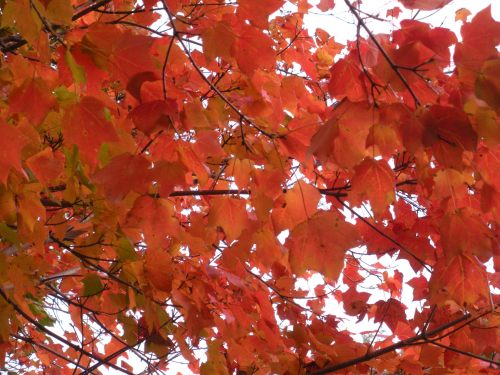 October 2009 in my backyard

I’m not sure how it happened — if I clicked on a free offer, or if someone secretly gifted me — but I’ve been receiving Yankee magazine in the mail  for the past few months. The current issue has tips on the best places to view the famous fall colors.  I thumb through each issue multiple times, yearning to experience life there in New England as I am seeing it with covered bridges, salt-box houses and red barns.  And for those few minutes a day, I am transported.

I’ll post the answer to the puzzler on Saturday.  😛 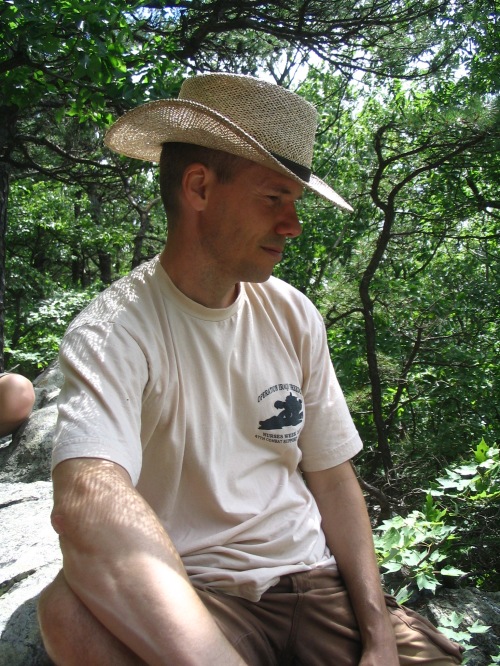