We drove to the coast again, but this time we went north:

and we FINALLY got to see the wild ponies up close!

The herd here at the northern end of Assateague is separate from the one down at the southern part of the island, where the ponies are owned by the Volunteer Fire Department of Chincoteague and are known as the Chincoteague ponies. The southern ponies get veterinary care and some dietary supplement, plus the annual pony swim keeps their numbers steady. In contrast, the ponies of Assateague are  given a birth control vaccine (each mare is allowed to foal one time) to keep the population from growing too large and destroying the ecosystem. They are perhaps more wild, since they do not receive regular veterinary care or supplements, but they are not fenced off from visitors. Instead, we are told to steer clear of the ponies. They do bite, just like any wild animal.

There is a fence dividing the island and keeping the 2 herds separate.

This foal is 5 months old 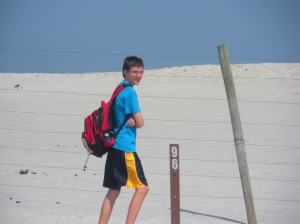 We’ll see more horses later. Time to find our reserved walk-in tent camping site. We unloaded the vehicles and set up our shade and bug shelters first. The wind was blowing, but the sun was hot. A fly drew blood on my shin within 90 seconds of leaving the car.

It was Patrick McManus who coined the term “A Fine and Pleasant Misery” to describe camping. We’ve had a lot of experience camping and therefore have claimed many fine and pleasant miseries.  But for now, it’s time to hit the beach!

Did you notice that the blue skies seem to have disappeared? 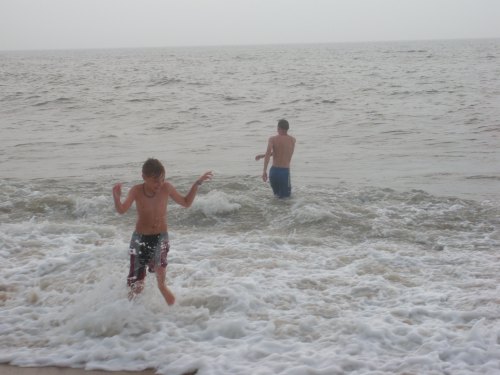 According to one website, “Seashore camping can be a memory to treasure—or a bad experience for the unprepared. There is no shade and mosquitoes can be abundant from mid-May to October. High winds can pull short tent pegs out of sand.”

High winds can also be the vehicle that bring in a severe thunderstorm. When a ranger drove through the parking lot announcing, via loudspeaker, the impending arrival of a severe storm, we figured it was time to get the tent set up and staked down.  Being married to a seasoned camper-of-all-seasons (who is also a former infantryman) has its benefits… and so does having almost-grown sons. They set up the tent in almost record time. Me? I took pictures and video of them working. Sometimes it’s nice to be the only female surrounded by males.

Shelters were already up; now it's time to get the tent pitched.

*Note that green pavilion in the far background. It’s really nice. You won’t be seeing it again. 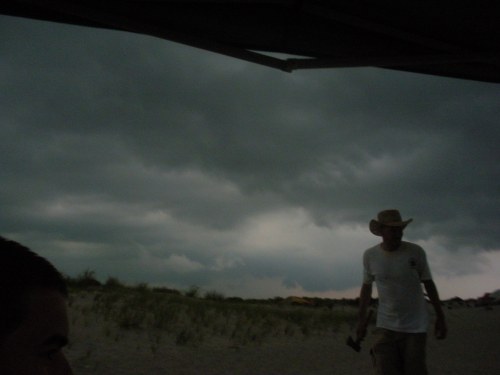 The storm is a-comin’. It’s a doozie. Here’s a sample:

A Fine and Pleasant Misery, Part 3: the worst of the storm

You can see more storm videos (a series of 7) here 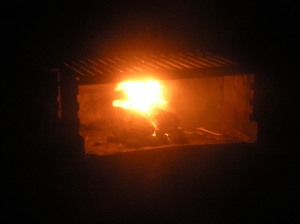 After the storm, we lit the charcoal in the grill to put some hot food in our bellies.

The wind made the tent boom until 1am.

Next time, the final leg of the trip…