Sanity? I’ll rally for that! 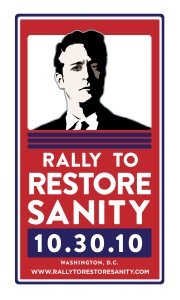 1. I’m headed into The City tomorrow for a chance to take pictures and step out of my comfort zone.  My 19yo son thinks we are crazy (“you’ve never talked politics”  “DAD is going?!?”). While it’s true that neither parent is politically oriented,  the poor boy didn’t think his dad had ever been to a concert (he has) and wondered why the man would go and put himself in a big crowd of people.  MusicMan’s image of his parents has been shattered.
At least the 14yo approves of our “Indecision 2010” activity!

2. At 9:30pm last night, I was helping SnakeMaster sew and use a glue gun.  After all, isn’t that what you are supposed to do with green tomatoes, sticks, and cucumbers? This is the result:

That stuffed cloth thing on the end? It’s his tail. Be nice. I didn’t design it, I just followed my instructions given by a 5th grader.

4. This is what he wore for Scouts on Wednesday night. He designed the cape from old, worn-out jeans and the sword is his own creation as well:

5. This is our peak weekend for color, although the wind has already blown some of the leaves off the trees.

Bringing in the Harvest 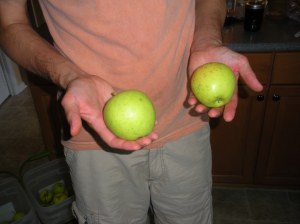 We were blessed this year with more apples than we could possibly use. Neighbors were given bagfuls of the best looking fruits, and the rest were sliced and dried or turned into apple crisp, apple cobbler, and applesauce. 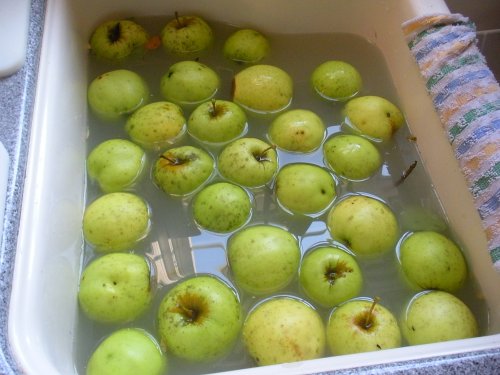 I probably should have used that photo for a weekend reflections post, but if I wait any longer it will be November and well past apple picking season. (Then you’ll KNOW how long ago I took this picture!) 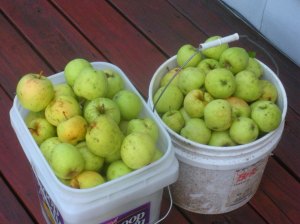 Last year we had maybe two apples from our trees, so we were pleasantly surprised to have a bumper crop this year.
Our tomatoes and peppers didn’t fare as well, but I’m certainly thankful for all that we have.

What are you thankful for today?

SnakeMaster begins his Halloween preparations nearly a year in advance. This year he has 3 options for dressing up, but a few weeks ago, this was the favorite:

See the homemade "knife" and sheath? This kid is creative! 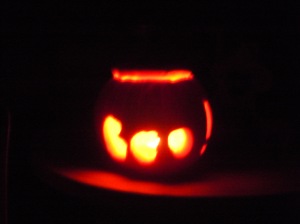 The Muffed Photo Meme is sponsored by Thom and can be found every Tuesday (actually usually as early as Monday afternoon) on his blog, Thom’s Place 4 Well, Whatever.  This meme really fits in his “well whatever” category:

Each Tuesday post a completely crazy, messed up photo — one you would normally delete. The subject matter isn’t important — did you take a picture of your thumb? The lens cap? The wrong half of great Aunt Betty? (Really, she usually has a head …) Or perhaps you’ve got a shot of your own nose hairs taken while you were trying to determine why the flash wasn’t working. Whatever your photo goof is, we want to see it!

I’m still training myself to stop deleting every single “bad” photo. After all, it’s hard to play this game (meme) with a GOOD picture!

This muffed target occurred  when I was trying to get a shot of a little girl dancing close to her mama, but right as I snapped the picture, a wine bottle was passed in between the bluegrass baby and my camera.

1. Between the boys and girls cross-country races on Wednesday, I stepped over to the fence and took this shot.

Have I mentioned lately that I love Fall? I do. 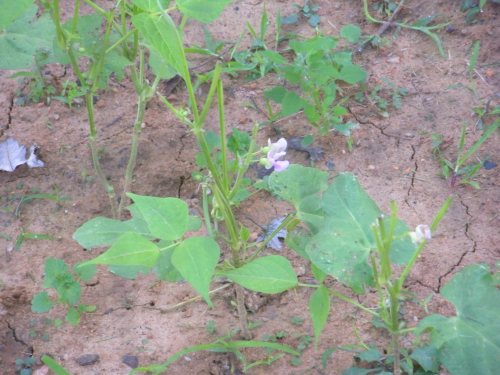 2. Something had been eating the late summer pea crop. Note that the first sets of leaves have been chomped right off. 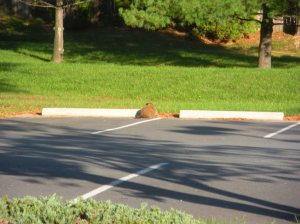 We have discovered the culprit who lives under the shed. He has since used his fat body to climb tear down the fence and help himself to the rest of the garden.
I saw his cousin Sunday afternoon in the church parking lot.

Yes, it’s a big fat groundhog.
Click on the pic to get a closer look.

3. I had an absolutely lovely Sunday afternoon. I went out to lunch with 2 girlfriends at a Vietnamese restaurant, and then afterward, two of us continued on to a local winery. What with the wine tasting, the talking, and the glass of wine we each sipped at the table while we listened to a young, local bluegrass group, I forgot to take any pictures! You’ll just have to take my word for it that it was wonderful.

4. Sometimes coming home after a near-perfect afternoon is a let-down, but Sunday evening had a surprise in store — an Autumn evening at the firepit.

5. Farmers Markets in small towns make me smile. Funky produce that looks like a masked bandit makes me smile even more.

There is a critter
(thankfully, it’s not a skunk)
hiding ‘neath the shed.

Can you guess what it is?

After all this hullabaloo over marching band, I can’t possibly leave out my cross-country runner…

Congratulations to EB and his team! EB ran a personal best today (he PR’ed, as they say in the biz) and both our boys and girls teams are headed to Regionals. 😀

Sometimes I luck out with a cute little video (like yesterday) and sometimes I end up with a blurry photo: 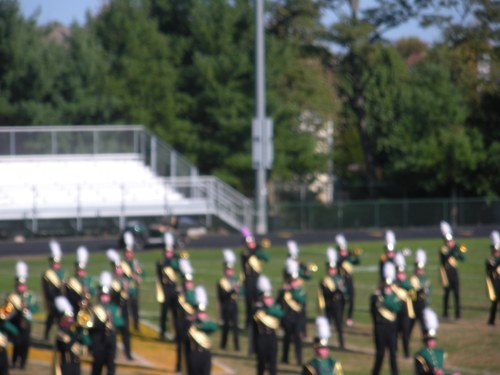 When you listen to music, does it make you want to get up and dance?

Posted in life LOVE and the pursuit of happiness, music, Musical Monday, Par-Tay

PARAPROSDOKIAN SENTENCES…. “A figure of speech that uses an unexpected ending to a series or phrase”   (I had to look it up)

Groucho Marx gave us some wonderful ones:

Ø   Do not argue with an idiot. He will drag you down to his level and beat
you with experience.

Ø   When I die, I want to go peacefully in my sleep, like my grandfather.
Not screaming and yelling like the passengers in his car.

Ø   Going to church doesn’t make you a Christian any more than standing in a garage makes you a car.

Ø   The last thing I want to do is hurt you. But it’s still on the list.

Ø   Light travels faster than sound. This is why some people appear bright
until you hear them speak.

Ø   We never really grow-up, we only learn how to act in public.

Ø   War does not determine who is right – only who is left.

Ø   Knowledge is knowing a tomato is a fruit; Wisdom is not putting it in a
fruit salad.

Ø   The early bird might get the worm, but the second mouse gets the cheese.

Ø   Evening news is where they begin with ‘Good evening’, and then proceed
to tell you why it isn’t.

Ø   To steal ideas from one person is plagiarism. To steal from many is
research.

Ø   How is it one careless match can start a forest fire, but it takes a
whole box to start a campfire?

Ø   Some people are like Slinkies… not really good for much of anything,
but you can’t help smiling when you push one down the stairs.

Ø   Dolphins are so smart that within a few weeks of captivity, they can
train people to stand at the edge of the pool and throw them fish.

Ø   I thought I wanted a career, turns out I just wanted pay checks.

Ø   A bank is a place that will lend you money, if you can prove that you
don’t need it and already have some in their bank.

Ø   Whenever I fill out an application, in the part that says “If an
emergency, notify:”  I write in: “DOCTOR”.

Ø   I didn’t say it was your fault, I said I was going to blame you.

Ø   I saw a woman wearing a sweat shirt with “Guess” on it…so I said
“Implants?”

Ø   Why does someone believe you when you say there are four billion stars,
but check when you say ‘the paint is wet’?

Ø   Women will never be equal to men until they can walk down the street
with a bald head and a beer gut, and still think they are sexy.

Ø   Why do Americans choose from just two people to run for President and
fifty for Miss America?

Ø   A clear conscience is usually the sign of a bad memory.

Ø   The voices in my head may not be real, but they have some good ideas!

Ø   Always borrow money from a pessimist. He won’t expect it back.

Ø   A diplomat is someone who can tell you to go to hell in such a way that
you will look forward to the trip.

Ø   Hospitality is making your guests feel at home, even if you wish they
were.

Ø   Money can’t buy happiness, but it sure makes misery easier to live with.

Ø   I discovered I scream the same way whether I’m about to be devoured by a great white shark or if a piece of seaweed touches my foot.

Ø   There’s a fine line between cuddling and holding someone down so they
can’t get away.

Ø   I used to be indecisive. Now I’m just not sure.

Ø   I always take life with a grain of salt, plus a slice of lemon, and a
shot of tequila.

Ø   When tempted to fight fire with fire, remember that the Fire Department
usually uses water.

Ø   You’re never too old to learn something stupid.

Ø   To be sure of hitting the target, shoot first and call whatever you hit
the target.

Ø   Nostalgia isn’t what it used to be.

Ø   Some people hear voices. Some see invisible people. Others have no
imagination whatsoever.

Ø   A bus is a vehicle that runs twice as fast when you are after it as when
you are in it.

Ø   Change is inevitable, except from a vending machine.